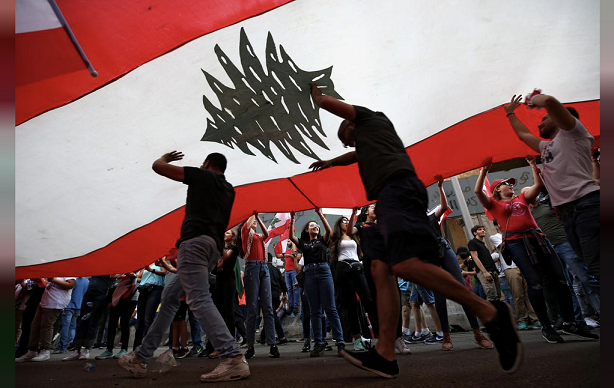 After the Lebanese government’s decision to impose a 24-hour curfew and extend general closure for more than a month, protesters took to the streets in the city of Tripoli in opposition to the heavy restrictions and lockdown put in place due to the rise in COVID-19 cases.


The national lockdown has had direct impacts on the poor in the wake of the country’s economic collapse, more than half of the Lebanese population now live below the poverty line. In parallel, the government did not take comprehensive measures to provide basic needs and supplies for the people. The lockdown rendered the livelihood of daily wage earners – who represent most of the Lebanese working class - extremely difficult as prices fluctuate and people are forced to spend their meagre savings, if they have any. The citizens of Tripoli, the country’s second largest yet poorest city, have been especially affected by the crisis as they witness a rise in unemployment and extreme poverty, shortage of fuel, food, medicine and basic services and a drastic deterioration of their living conditions.


Massive demonstrations went on for several days in Tripoli between 1/25/2021 and 1/31/2021, during which security forces used excessive violence to disperse protesters and fired live rounds, killing the 30 year-old Omar Taybah and injuring more than 45 people.


During the demonstrations, 30 people were arbitrarily arrested directly from the protest or from their homes and taken to investigation for allegedly having taking part in violent acts and vandalism. At least six protesters from Tripoli were charged with terrorism and theft by Lebanon’s Military Court while a few have been released. In addition, the detainees are supposedly being denied the right to call their families and access a lawyer, which violates article 47 of Law No.191/2020 concerning defense guarantees. The police have also deprived detained minors of their right to be accompanied by a juvenile delegate and there was evidence of torture against the demonstrators based on medical reports of one of the released detainees. Furthermore, arrests are not expected to stop as numerous protests are erupting across the country due to the local currency’s new record low of 10,000 LBP to the dollar.


This trend of shrinking civic space and human rights violations in Lebanon was also intensified by the assassination of the intellectual and activist Lokman Slim on the 4th of February 2021. Targeted killings of political figures, journalists and activists are not a new phenomenon in the country, where the vast majority of these political assassinations remain unpunished, and are thus expected to continue. All of this shows that there is an increased general tendency to normalize violations of basic freedoms and human rights in Lebanon as official institutions can no longer sustain the country or protect its civilians.

To conclude, there are many indicators of civic space restrictions and violations of human rights in Lebanon. The situation is also expected to worsen due to the crumbling of the country’s economy and institutional capacity. While writing this article, new movements and protests are taking place all over Lebanon which stresses the need for a close monitoring of the authorities’ response towards civilians.