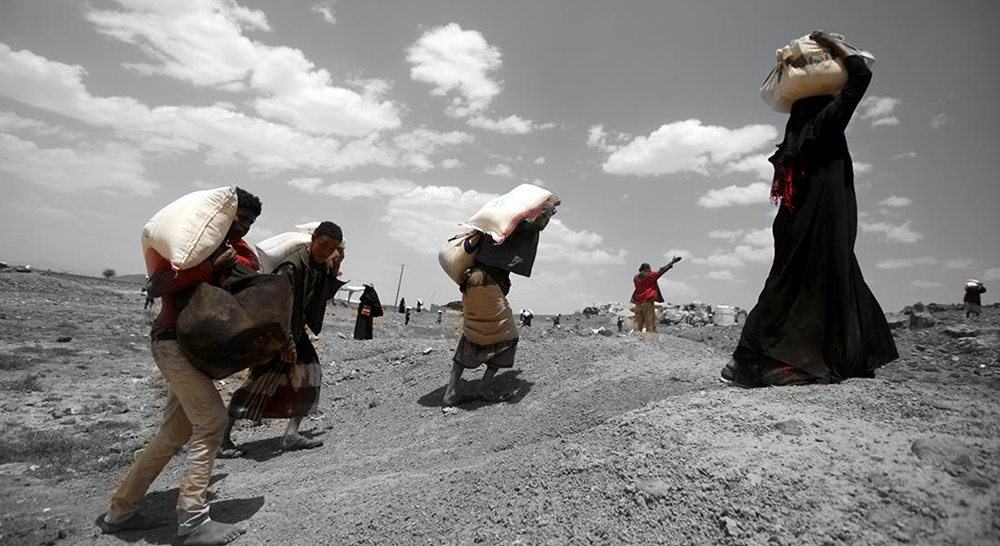 While diplomatic efforts for peace in Yemen reach a stalemate and armed confrontations between the internationally recognized Yemeni government and the armed Houthi group intensify, the humanitarian crisis has worsened and economic life continues to deteriorate. The Yemeni riyal declined by more than 175% in 2021 compared to the previous year. Prices of consumer goods and services skyrocketed and the humanitarian situation deteriorated in a country classified as living under the worst humanitarian crisis in the world.

By the end of 2021, the optimism brought about by the designation of a new international envoy to Yemen gradually began to fade. The Swedish diplomat, Hans Grundberg, was appointed to the post of Special Envoy to Yemen five months ago. He succeeded the British Martin Griffiths, who finished his duties at the end of last June. However, no significant progress has been achieved, and the armed conflict between the internationally recognized government and the Houthi armed group has intensified, especially on the outskirts Marib, one of the main government strongholds, currently considered a safe haven for millions of Houthi opponents.

The most prominent military developments on the ground had been the armed confrontations in Marib and the Houthis taking control of Al-Bayda governorate in central Yemen and parts of adjacent Shabwa governorate. The joint forces led by former President Ali Abdullah Saleh's nephew withdrew from the vicinity of Al-Hodeidah governorate on the western coast from one side and were pushed back one hundred kilometers. The Houthis' military superiority comes in light of the lack of clarity in the military vision of the government and its allies, the so-called "Arab Coalition to Support Legitimacy" led by Saudi Arabia and the UAE.

Internally, conflicts between the components of the coalition supported by Saudi Arabia and the UAE were some of the year's most prominent features. The Yemeni government appointed by Yemeni President Abd Rabbo Mansour Hadi still enjoys a nominal presence in the temporary capital, Aden, which is controlled by the Southern Transitional Council, which wants the secession of the south. The government spends most of its time in Riyadh, along with President Hadi, who has not been in Yemen for years. Unity of decision-making is absent in the governorates under government control. They are contested by multiple parties and projects and are characterized by lack of harmony.

The monetary division has become the most prominent economic feature in Yemen. The banking sector is stuck between two central banks, the internationally recognized Central Bank of Yemen, headquartered in Aden, and the Central Bank in Sanaa, controlled by the Houthis. Unfortunately, this division impacts the currency rate and monetary policy as a whole. The Sanaa Bank prevents dealing with the newly printed banknotes by the Central Bank in Aden. The riyal is now traded at a dual rate. The old currency is still being used in the Houthi controlled areas in northern, central, and western Yemen at a rate of 600 riyals to the US dollar, compared to 1,000 riyals per dollar for the newly printed currency in government-controlled areas, at the time of writing this article.

This division caused a significant deterioration in the price of the local currency and a significant increase in Inflation and prices of goods and services. Other factors played a role, such as the government continuing to cover the deficit through currency printing, the expiration of the Saudi deposit estimated at $2 billion, the halting of productive economic sectors, the imbalances in the government’s institutional structure, and the inability to attract and unify the tax and customs base.

Despite the recent relative improvement in currency prices following the decision to change the leadership of the Central Bank of Yemen in Aden, there are no clear indications so far of the stability of the currency rate. Saudi Arabia still refrains from providing another deposit for various reasons. Some are political, and others are related to concerns about the Yemeni government and the Central Bank of Yemen's performance and suspicions of corruption that have been raised on a large scale recently.

It remains difficult to separate economic developments from the political context and the struggle for influence in Yemen. The Yemeni government appears to be the weakest link. It is gradually turning into a helpless administration and receives its orders directly from the Kingdom of Saudi Arabia. The matter is not much different for the Houthis who are Iran's arm on the opposite side.

In the midst of this complex political and military reality, Yemeni citizens are facing a deepening economic crisis. As a result of the collapse of the Yemeni currency, the riyal, employees are earning no more than forty dollars per month on average. Most public employees in Houthi-controlled areas have not received salaries for four years. The majority of Yemeni youth suffer from unemployment, creating the opportunity for more recruitment and mobilization to fight and invigorate the war economy.

Yemen's economy can be characterized as a war economy. Companies with huge capital have emerged that manage the import of oil derivatives and invest in real estate, telecommunications, shopping malls, trade in goods, and relief services financed by UN agencies and international organizations operating in the country. This economic activity underpins those who control the war and its developments, as well as its beneficiaries.

Over the course of seven years, the war has left economic and humanitarian disasters. Day after day, Yemenis lose their ability to obtain shelter and are forced into displacement and poverty. From January to September alone, sixty-four thousand people were displaced by battles in the vicinity of Marib Governorate, according to a report by IOM, twenty-five thousand were displaced people in Al-Hodeidah governorate during the month of November only. According to a statement by the Office for the Coordination of Humanitarian Affairs in Yemen, about 50,000 Yemenis are already living in famine-like conditions, while five million people are one step away from this situation.

In return for this exorbitant war bill, the international community’s interest in Yemen also began to dwindle. UN Secretary-General Guterres expressed his disappointment by the donor conference to fund relief operations in Yemen in 2021. The total donations amounted to only one 1.7 billion dollars, compared to the 3.8 billion dollars aimed for by the UN in the conference organized in partnership with Switzerland and Sweden.

The waning optimism about ending the war in Yemen at the current stage compels thinking about creating new facts at the local and regional levels to bring about positive transformations. It requires the emergence of a local leadership that enjoys popular legitimacy and has the freedom to decide and move forward in a way that serves the interests of Yemenis in the first place, while finding a formula for understanding the nature of regional and international relations.

Reforming the economic and humanitarian issue must start from resetting the national compass and bringing about political and institutional reform. It is illogical for the decision-making authority to remain hijacked by regional and international powers or through agents who openly profess their affiliations abroad at the expense of the interests of a people suffering from the ravages of war and its repercussions.