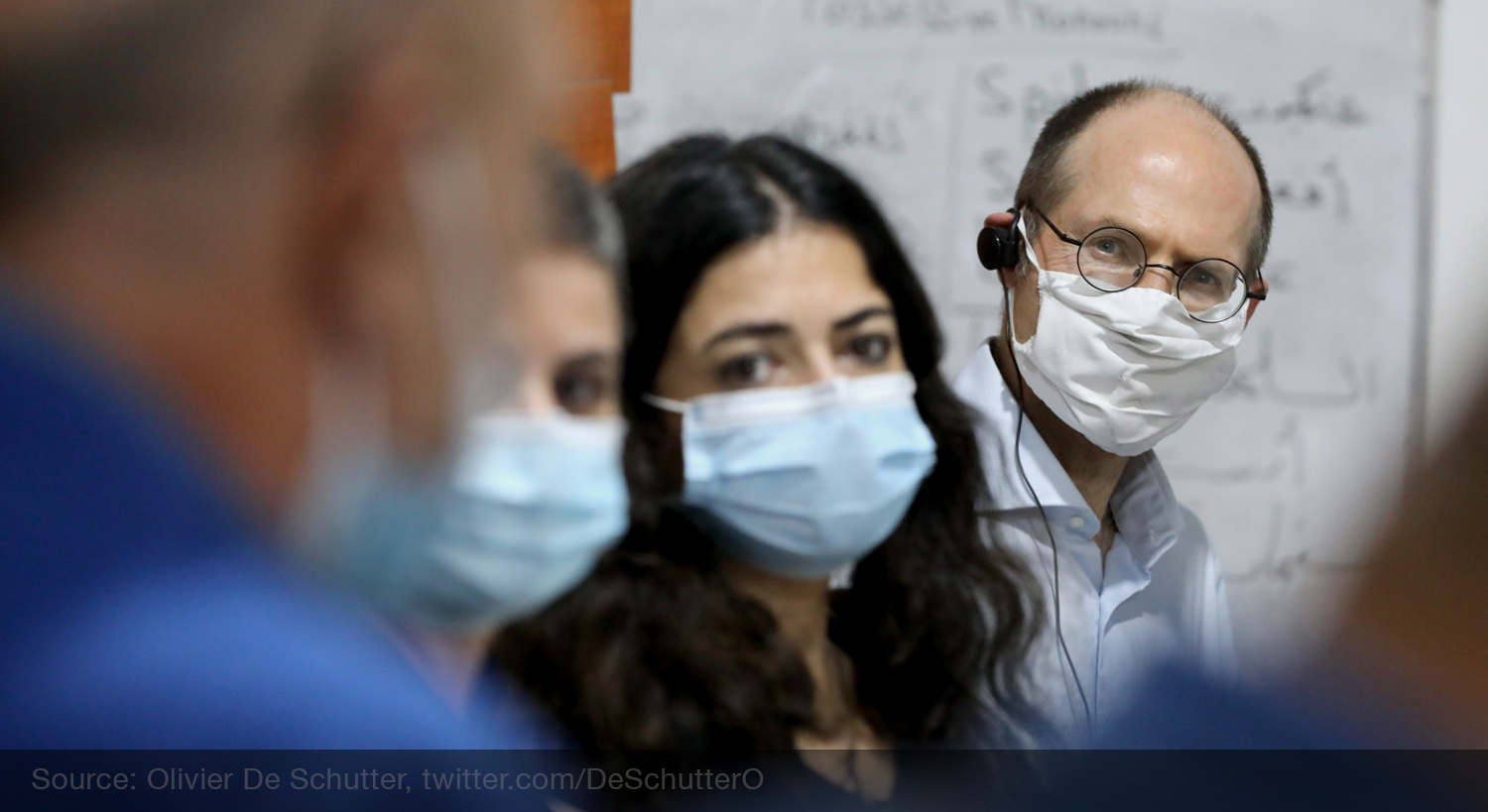 For nearly two years now, Lebanon has been faced by a major socioeconomic crisis qualified as one of the most severe crisis’ episodes since the mid nineteenth century, other than the COVID-19 pandemic and the August 4 explosion which has subsequently worsened the situation.

• The Lebanese population is now subject to a significant rise in poverty due to the decrease they face in their living standards.

The political and economic causes of poverty and inequality

• The Neo-patrimonial state prevented the adoption of fair public policies. it increased the public’s reliance on sectarian leaders. As a consequence, sectarian leaders maintain their grip on power.

• The relationship between political and business elites is based on the following formula: In exchange for major tax breaks, laissez-faire policies, and minimum state intervention, business elites provide regular support to political elites.

• The direct looting of the Lebanese treasury, which is the cause of today’s significant levels of public debt.  As a consequence, most of the money the state collected through the bonds was in the end used to repay the interest rather than to fund social welfare programs or public infrastructure. This direct profit scheme enriched bankers as well as the political elites who had issued bonds in the first place.

• The collapse of Lebanon’s financial sector presented an opportunity to revamp their unsound political economy; the dismantlement of the sectarian power-sharing system, and the introduction of a new redesigned Lebanese economic model which must have social justice as its core given Lebanon’s extreme levels of poverty and inequalities.

• Tax reform and universal social protection should be building blocks of any reform plan of Lebanon.

However 2 Years After October 17th: Policies lead to more poverty and more inequality

For almost two years now, the Lebanese have been restricted from their dollar deposits, and are being forced to withdraw their money in the local currency with a haircut of almost 80%. This haircut has affected small depositors, further exacerbating the inequality.

Lebanon’s subsidies program that was implemented over the 2 past years, was not just expensive, but also regressive; the richest benefit from subsidies far more than those economically marginalized. This is because the wealthiest have the greatest and most consistent access to subsidized goods with their purchasing power. An analysis by UNICEF and the International Labour Organization (ILO) revealed that only 20 percent of subsidies benefit the poorer half of Lebanon’s population.

On the social protection level, there has been, negotiations with the international organizations targeted at helping the poorest with scattered and targeting initiatives away from human rights based and universal approaches including:

Most of Lebanese political Elite agree that the country is in need of a bailout by the International Monetary Fund (IMF). The IMF attached conditions to its proposed package including structural reforms that increase transparency and financial stability as well as reduce corruption and tax evasion. The country’s ruling class has proven unwilling to meet such demands for fear of losing its privileges. As a result, the negotiations with the IMF were interrupted.

The different policies and initiatives taken after the revolution are considered as a continuation of the “deliberate depression” (the World Bank). They deepened poverty and inequality, they lacked the vision, and showed the incapacity of the ruling elite which drove Lebanon to the crisis the crisis to present the solution. Since the causes were political and economic the solutions should also be multi-dimensional and visionary.

ANND’s intervention on the situation of Refugees and Migrants in Lebanon – November 6, 2021 - Click here to download pdf.

Lebanon boasted the highest per-capita concentration of refugees in the world, with more than 1.5 million Syrians and Palestinians living inside its borders. The vast majority live below the poverty line.

- In Lebanon, there are an estimated 3,000-5,000 “Non-ID” Palestinians who are often considered to be the most vulnerable Palestinians in Lebanon. Arriving in Lebanon in the 1960s, these persons do not hold formal and valid identification documents. Without documentation and legal status in Lebanon, they face restrictions on movement, risk arrest or detention, and face severe obstacles completing civil registration procedures or accessing other rights.

- The General Security issued the Special ID Cards which only give them the right to circulate. But, nowadays, the issuance of this card is stopped, and not even renewed.

- The renewal period should be three years instead of one year

- A practical mechanism for renewing the cards should be identified, with a definite period of time.

- In April 2019, the Supreme Defense Council allowed the forcible deportation of refugees by handing them over to the authority of their country of origin. And between May and August, 2,447 refugees were deported to such countries. The deportation orders were executed summarily by the General Security without verification of the risks upon return and without granting the refugees the right of defense and the right to resort to the judiciary.

- The fate of Syrian nationals who were being deported remain unknown.

- While Lebanon is committed to the principle of non-refoulement, Lebanon disregarded international law by violating non-Refoulement (and thus article 3 of Convention against Torture) and by discriminating against refugees in violation of article 26 of the International Covenant on Civil and Political Rights (ICCPR).

- It is recommended that Lebanon strictly adhere in practice to such a principle, and strengthen the protection of rights and freedom of refugees, including by respecting non-refoulement obligations.

- The deportation policy seems one of several measures that increased pressure on Syrian refugees to return, including forced demolition of refugee shelters and more rigid applications of the Labor Law.

The work of Refugees in Lebanon is not only a right, but a common interest

The economic impact of the Syrian Refugees’ presence in Lebanon

- There is a growing hostility between refugees and host communities as a result of the deteriorating economic situation in Lebanon. But refugees’ role in the local economy must be acknowledged.

- The International community has invested heavily in improving infrastructure and services trying to counter the impact that refugees are having on the host community. This has benefitted the whole Lebanese population. It involved local municipalities and communities such as projects that improve services and create economic opportunities for all vulnerable communities, use micro agriculture schemes to supplement rural households’ income, and lend money to small businesses facing challenges.

- Initiatives also include work schemes for both refugee and Lebanese populations, vaccinations and food for Lebanese livestock, repairs and upgrading of schools, water and sewage infrastructures.

- The refugees did not cause the financial crisis that the country is currently experiencing. In contrary, their presence should be perceived as an opportunity to boost the productive sectors during the crisis to reduce the gaps in the balance of payment.

- A policy aiming at integrating refugees into the economy would be beneficial from a macro perspective: refugees in Lebanon should be seen as complementing rather than substituting for Lebanese workers; thus, the total welfare of the economy would increase when this supply is integrated into the economy, particularly in productive sectors. As examples, the agriculture and industrial sectors are important targets that could attract refugees who would then help in improving sectoral productivity. Development can happen only when both communities are included and participate.

- A more explicit strategy of including both communities needs to be advanced in order to create development by eradicating the structures that keep producing inequality, exclusion and poverty.

- More than 60 years after their presence in Lebanon, the Lebanese law did not determine the legal status of the Palestinian Refugees. It is still dealing with them as foreigners or sometimes as a special group of foreigners, thus denying them from some rights granted to foreigners.

- Unlike foreign workers, they consume and save in the country and enjoy a consumption pattern similar to the Lebanese.

- Palestinian refugees are subject to the Ministerial Decree 17561/64 that organizes the participation of foreigners in the Lebanese labour market, which contains 3 restrictive rules:

2. The principle of reciprocity of treatment in Lebanon, a condition impossible to meet for Palestinians given the impossibility at the material sense. This condition was excluded by the legal Amendments from the prohibitions of working in manual and clerical jobs (Article 59 of the Labour Law and Article 9 of the Social Security Law dated 17 August 2010).

3. The requirement to obtain a work permit prior to employment:

- It is practically difficult to obtain;

- Linked to the mandatory contributions that should be made by both the work permit holder and the employer to the National Social Security Fund (NSSF), against which the Palestinian worker is not entitled to receive full benefits, but only obtain the end-of-service indemnity.

- Introducing a free three-year work permit, so as to facilitate the procedures for both the worker and the employer.