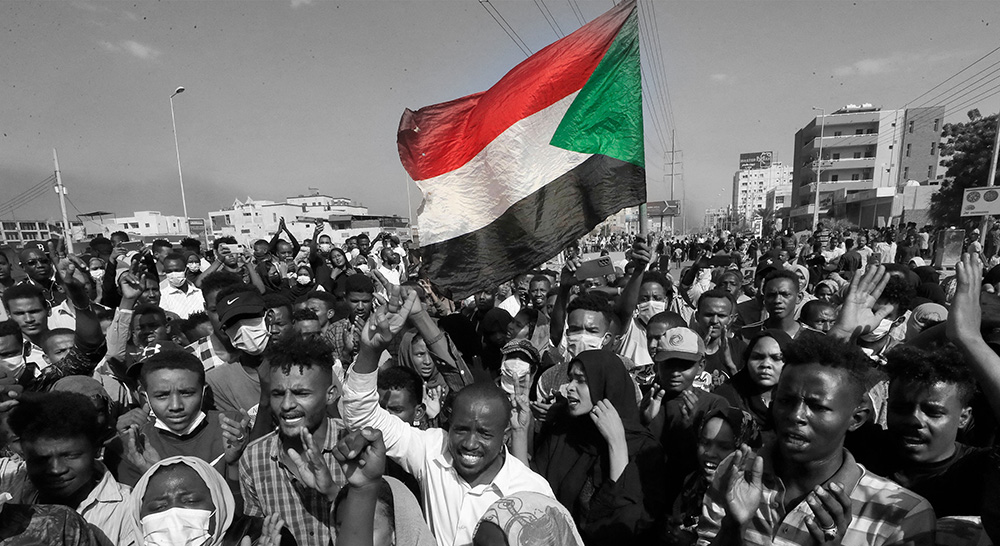 Sudan: Challenges to Democratic Transition and the October 25 Coup

The December 2018 revolution in Sudan established a new political and social reality, almost separate from the post-colonial state. Although the country had witnessed two previous revolutions, in October 1964 and April 1985, the December revolution has acquired different features and challenges. The change it affected was not superficial or a formality at the top of the state apparatus. Rather, it represented a complete popular transformation seeking to achieve its slogans: peace, freedom, and justice.

The struggle to achieve those slogans was strenuous. The Sudanese faced a complex system and a client state with multiple alliances. The course of the revolution lasted 4 months until the overthrow of Al-Bashir in April 2019. But it was not the end. A two-month sit-in was held to protest military leaders' control of the transitional period and bring it under civilian control. The sit-in ended tragically. It was brutally dispersed by the military, leaving more than two hundred dead, hundreds of wounded, and dozens missing. A constitutional document in August 2019 granted great powers to the civilian side but did not achieve all the popular demands.

This agreement established a partnership between the military and civilians and lasted until the military coup on October 25, 2021. In an attempt to mitigate the coup's severity, a forced agreement was announced on November 21, 2021, between the Army Commander, Al-Burhan, and Prime Minister Abdullah Hamdok. However, despite Hamdok's popularity, he could not persuade the masses who rejected the coup and partnership with the military leaders. As a result, peaceful protests continue, despite the martyrdom of dozens of peaceful revolutionaries.

The year 2021 had promised economic and political stability in Sudan. The Juba Peace Agreement was signed in October 2020 and involved several armed movements. Negotiations with other movements began in early 2021. There was hope the year would witness the agreement's conclusion with all the movements that had carried arms against the Bashir regime, especially since he had been toppled since April 2019.

The year also witnessed remarkable progress in integrating Sudan into the international economic system and ending its isolation for nearly thirty years. An agreement was signed in Paris to support the democratic transition. Sudan obtained $23 billion in debt forgiveness, out of a total of $50 billion, through the HIPC initiative to obtain support from international financial institutions. Thus, Sudan obtained $2 billion in direct aid, in addition to the direct cash transfer program targeting 80% of the population. The exchange rate of the Sudanese Pound stabilized following its liberation. Although these reforms have had an unfavorable economic and social impact on the living situation in the country, they were not a matter of dispute between the military and civilians. To be more specific, the government's economic reform policies, despite their positive impact on macroeconomic indicators, meant lifting subsidies on basic commodities and contributed to an increase in hardship, especially for the most fragile and poorest segments.

On the other hand, civic space saw a huge expansion. New paths have opened up to the various community organizations with greater freedom. A process to amend civil and trade union laws was underway, in line with the freedom of expression and organization principles. In addition, all armed groups, even those that have not signed peace agreements with the transitional government, had stopped their military operations, which positively impacted those displaced due to regional conflicts, except for isolated incidents.

The arguments and justifications put forward by the leaders of the military coup on Monday, October 25, 2021, are difficult to accept, especially the role of political parties in the deteriorating situation and the control of a group of parties over the transitional authority. The economic situation is theoretically on a better track than what was inherited from the Bashir regime. The achievement of the peace agreement, albeit partial, indicated political and social improvement. The conflict between political components was a mere excuse for the army's intervention.

However, the motives behind the military coup are easy to ascertain, including stopping the transfer of power to civilians, namely the presidency of the Sovereign Council, which was to be transferred to civilians in November 2021. In addition, the military maintains great economic interests. It continues to evade the executive authority's request to return government-military companies to civilian authorities. These companies control multiple economic sectors and export goods without being subject to the powers of the auditor general or being bound by the controls of the Ministry of Finance.

Military leaders also continued to evade their commitment to reform the military and security system as stipulated in the 2019 Constitutional Document. They fear that handing over power to civilians will lead to the investigation of violations and crimes they are accused of, including involvement in dispersing the sit-in on June 3, 2019. Another factor is strong relations between the military leadership and regional powers that prefer not to deal with civilians or any democratic system.

The military coup was met with popular, regional, and international rejection. However, it was recognized and supported by regional players, such as China, Russia, and Israel. Nevertheless, continuous pressure on the coup leaders from inside and outside the country slowed down the process for a while. Still, it failed to return the country to the path of civil democratic transition.

Back to the Old Habits of Restrictions and Tyranny

The coup's early days witnessed extreme arbitrariness and suppression of public liberties and political and civil rights. The military arrested political, civil, and union leaders and media professionals. It confronted protesters with excessive violence that led to the martyrdom of 44 peaceful protesters and dozens of wounded, some of whom with serious and permanent injuries. Civil service and media management were dismissed in successive and quick decisions. The internet and communications services were suspended for a long period. FM radio was also suspended for varying periods. The last station returned to work on December 11, 2021.

Following the fall of Bashir, civic space had been invigorated, and CSOs initiated several civil and political education programs. However, civil society's work was severely impacted by the military coup. Some donors also stopped supporting CSO activities designed to support the climate of civil and democratic transition.

Anti-coup activities are being initiated and led by grassroots civil organizations called Resistance Committees. They constitute a part of the broader civic space and have acquired some features of social movements that enhance non-partisan political participation. The committees had been active since before the fall of the Bashir regime. However, they gained influence after the coup and led the mass movement. Considering the political movement's weakness, especially due to the arrest of the Freedom and Change leaders who represent the civil component in the democratic transition partnership, the Resistance Committees became the strongest and most influential voice in the political field. Many began organizing grassroots conferences, and their work is characterized by coordination and interdependence.

In conclusion, this highly dynamic political and social reality means many possibilities are still open. Civic space remains closely linked to the political process in the country. On the one hand, military leaders might succeed in proceeding with their coup with new tactics to overcome internal and external pressure. On the other hand, revolutionary resistance action could succeed in shifting the country into a full democratic civil transition. Finally, another possibility remains, which is to reach a settlement that restores partnership between the military and civilians. The success of any of these possibilities will severely affect the future of Sudan as a whole and the expansion and reduction of civic space in the days to come.