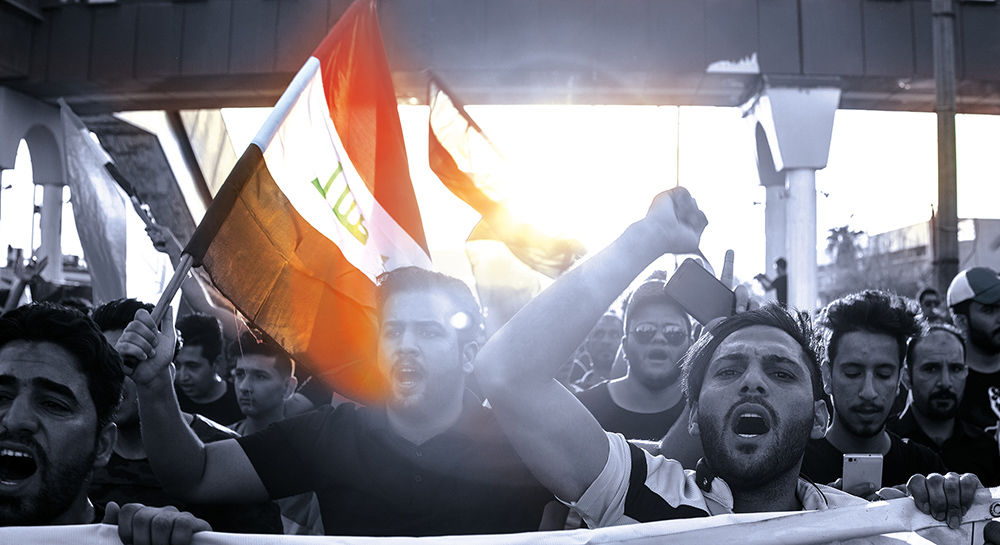 Another turbulent year has passed in Iraq. The country saw twists and turns of various repercussions, from health, political, and economic crises to security breaches impacting governorates that have not experienced this level of violence for years. Debates on the state budget showed concern over the exchange rate and the improvement in the global oil markets. However, the country's recovery was postponed, as fiscal austerity measures continued and the deteriorating economic reality was ignored.

On October 10, 2021, Iraq went into a political crisis due to election results that shocked traditional forces dominating the political scene since 2003. It saw the rise of Shia and Sunni forces whose performance was not expected to be as strong. The large number of seats they won flipped the political equation in the country. It opened the door to many possibilities regarding the shape of the new cabinet, the next prime minister, and the type of policies that could be pursued in the next four years.

Mustafa Al-Kazemi’s government failed to complete the 2020 budget and get its approval by Parliament. After submitting a draft, it quickly withdrew it. It functioned based on the 1/12 principle, which allows it to spend an average of what was spent in the previous year, addressing through the borrowing law adopted at the end of 2020.

As for actual implementation, the open budget data published by the Ministry of Finance until October 2021 reveal that total spending amounted to 76.094 trillion dinars, which constitutes 58.5% of the total planned spending, including 66.127 trillion dinars in current spending (73.1% of total current spending), while the implemented investment spending amounted to less than 10 trillion (34.2% of the planned investment). The data lead to several conclusions, including:

- Since the actual generated revenues amounted to 81.649 trillion dinars, this means that there is an actual surplus of 5.555 trillion dinars until the end of the first ten months of the fiscal year.

- Public finances estimates are persistently poor, noting the gap between planned and actual revenue and spending, mainly due to the Ministry of Finance failing to finance spending units.

- There is a continuing focus on current (operational) spending and a neglect of investment spending despite the clear economic need for investments. This means the restrictive role of unplanned government austerity will continue despite the epidemic recession, delaying its exit from the crisis.

- Although Article 14/Third/A stipulates the suspension of appointments, there is a significant increase in the number of workers in the 2021 budget, which refers to a total number of 3,263,834 employees, an increase of 321,944 job grades. Spending on their compensation amounts to 53.839 trillion dinars (59.5% of the total operating expenditure), a trend that blatantly contradicts the reforms promised by the white paper. Moreover, actually spent employees compensation for the first ten months of 2021 amounted to 34.132 trillion. Thus, the total compensation of employees will reach about 41 trillion dinars at the end of the year, that is, about three quarters of the amount planned to be spent according to the law.

The government committed to early elections as one of the main pillars of its political program. It had been formed against the background of the protests that overthrew Adel Abdul-Mahdi, after a difficult period in which two candidates failed to agree on a cabinet. A new elections law was approved that changed the variables of the political process and was fundamentally different from all former electoral systems. It was based on the multi-constituency system, according to which the country was divided into 83 electoral districts, and where candidates can compete within the district. This new system intersects with the single district system (2005), the open district system (2010 and 2014), and the formula of the “Saint Legault” electoral system (2018), in which each governorate became a single electoral district.

The electoral system's novel nature imposed a competitive formula that political parties had not tested, since those who received the most single votes were considered winners regardless of the list's results. In the previous elections, a candidate’s victory was not sufficient to guarantee access to Parliament, if the candidate's list failed to reach the qualifying percentage. In the 2018 elections, quite a few candidates obtained the largest number of votes in their provinces, but were unable to reach Parliament. On the other hand, the new law practically allowed, for the first time, wider participation of independent candidates. Figures from the Independent Electoral Commission show the participation of about 800 independent candidates out of a total of 3250 who competed for 329 seats. They included 83 seats allocated to women under the quota system, which gives them 25% of the total seats in Parliament. Religious and national minorities were allocated 9 seats.

The elections took place on October 10, and the preliminary results  announced by the Independent Electoral Commission on October 16 came as a real shock to traditional Shia forces. The Sadrist bloc led with 73 seats out of 329, followed by the Progress Alliance headed by Parliament Speaker Muhammad al-Halbousi with 37 seats. The State of Law coalition ranked third (34 seats) and the Kurdistan Democratic Party fourth (33 seats). The Sadrist victory was not the only surprise. The State of Law coalition led by former Prime Minister Nuri al-Maliki took 34 seats, having won 25 seats in the 2018 elections. The preliminary results recorded the rise of emerging parties and independent personalities who won 40 seats.

On the other hand, the coalition between the Alliance of National State Forces led by Ammar al-Hakim and the Victory Alliance headed by former Prime Minister Haider al-Abadi was the biggest loser, obtaining 4 seats, compared to 40 seats in the previous elections (Victory 21 and the Hakim's Movement 19 seats). On the other hand, Al-Fateh Alliance, which includes the political wings of several Popular Mobilization factions, was down to 16 seats, although it came in second place in the 2018 elections (48 seats).

Since the announcement of the unofficial preliminary results, the losing forces within the coordination framework have rejected the results and called for demonstrations. They demanded manual recounts for all electoral stations, which was rejected by the Commission for violating the election law. As the crisis developed, calls to cancel the results and reorganize the elections began to appear, including a legal case before the Federal Court.

It seems that the process of forming the new government will be fraught with problems resulting from the difficulty of reaching balances that do not take into account the results of the elections. Although the component partnership (Shias - Sunnis - Kurds) is expected to continue, the Shia-Shia dispute will constitute a decisive factor in the formation of the new government. According to Muqtada al-Sadr, the government will be burdened with great tasks and needs a "strong man" to carry out its responsibilities and confront the various parties. However, all partners will prefer a "gentleman" president who does not pose a challenge to the traditional forces, including the forces of partnership components.

The World Bank expected economic conditions to improve gradually with the rise in oil prices and the increase in OPEC+ countries' production quotas. However, it was not optimistic about GDP growth, expected at 1.9% in 2021 and 6.3% on average in 2022-2023. This caution in forecasts is attributed to the nature of the Iraqi economy, which is excessively dependent on oil to achieve growth, exports, and public revenues, in addition to the increasing inflexibility in the budget, which threatens macroeconomic stability. The continued lack of investment and the weak business climate in non-governmental sectors are other factors that impede sustainable growth programs and effectiveness in providing services.

In light of the risks that characterized 2021, the economy's recovery faces several threats, including:

● The role of the state and the failure to implement economic reforms.

● Delays in providing the vaccine and the possibility of returning to additional closures.

Nevertheless, the decisive factor in delaying recovery was the role of the state and the failure to implement economic reforms. Despite the promises of reform contained in the "white paper," the Covid-19 recovery plan, and promising to improve the value of the currency, the government did not take significant and impactful steps towards economic reform. In terms of fiscal policy, it continued to restrict the economy through austerity, which deepened the epidemic depression facing the country. The "white paper," approved by the Council of Ministers in November 2020, was intended to serve as a comprehensive roadmap for reforming the Iraqi economy. It was meant to deal with challenges that accumulated over the past decades due to ill-conceived policies, corruption, mismanagement, lack of planning, and almost total dependence on oil as a main source of state revenue.

Regardless of who will be Prime Minister, he must proceed with caution regarding the next stage that requires political, economic, and security reforms, perhaps the most important of which is dealing with the issue of integrating the Popular Mobilization factions into the security establishment.